Here is a powerhouse of music and sound! Don’t go on its small size as these wireless earbuds are real BEAST when it comes to sound! Featuring the latest Bluetooth 5.1 together with Hifi Sound, Touch Controls, Waterproof Technology, and much more, these wireless earphones will boost your mood to help you burn your calories better!

OneAimFit F600 Beast Pro is far better than many top of the line earphones you find around. Why? Well, there are many reasons that makes these wireless earbuds best earphones starting from its affordable price tag to its wide range of exciting features. The upgraded 5.1 Bluetooth chip, surround sound and bass, noise cancellation, 6 hours of music/call time, touch controls and more, these Bluetooth earbuds are a treat for fitness lovers.

OneAimFit F600 Beast Pro Earbuds are compatible with almost all devices with Bluetooth. These include cell phones, tablets and computers. You can use them with any Bluetooth device as long as you can select the earbuds on the device.

Shipping is Free within the US, We offer Express 3-5 days delivery with 4 convenient warehouse locations across the USA. The orders are shipped on the same day if placed before 12:00 CST. The shipping time for Canada is 4-15 days. For now, we are only delivering to US and Canada. To learn more about our shipping policy click here.

OneAimFit covers any manufacturer defects within the first 30 days of purchase. Whether you find any problem in charging or if your sound is acting up, no need to panic, we have you covered. Click here to learn more about our Refund Policy.

When i opened the case i was like oh no ... cause the door is very light but the rest is fine the bass is okai good bass not too much well balance the sound level is high ! They play louder than my skull candy bit true 2! For the price its a good product :)

A
Ashley S
Works great. Case is far bigger than I anticipated

I work In a warehouse setting that doesn't quite "allow" earbuds (so the large case made it a bit interesting on how to be sneaky) and most definitely does not allow phones so I had to go back to 2007 and buy a mp3 player with Bluetooth capabilities. I have the skull candy earbuds which were good, my ears sweat pretty bad when I start working so they were sliding out a bit. And each bud only lasted 3 hours before "battery low" so I found these instead. I do hate that it's touch not a button because I tend to touch them often just out of habit to confirm they won't fall out (tbf they have yet to "fall out" but I've knocked one once by accident with my long hair getting stuck behind it)
Pros- I don't get the battery low on one earbud use until 4-5 hours in.
They stay in pretty well with sweaty ears and as active as I am at my work place.
The Case has a good charge in of itself. I've used both earbuds separately 2 Days in a row without charging case between and the case was still at 84% when I checked it after charging the earbuds the most recent time.
It comes with a bunch of sized earbud tips.
The sound is great. Don't forget to pair them together and turn the volume up on the right earbud per instruction so you have them as high as you want, as you can't raise or lower volume with one earbud at a time easily (I prefer to rely on my mp3 player volume buttons in this case)

Cons - the touch. It isn't "my long hair is turning it off" sensitive but if I readjust in my ear sometimes I pause the music by accident bc of touching it. That's annoying. Also. Can't carry them without case because afraid of accidentally powering on in pocket if I just wanted one.
The case size. However it can also usb to your phone or other device to charge it so I *understand* the size being as big as it is. It's too wide for a cigarette box, but about the size of my palm in length.

Otherwise I love them. Glad I found this website. 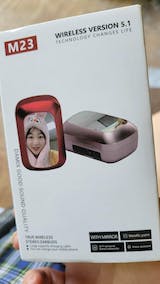 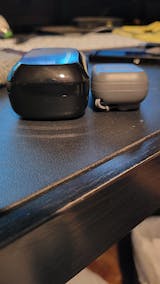 These earbuds are the best I've had and they are a great price for the quality and the sound is amazing and the noise cancelling is awesome. The touch is a little sensitive but ya they are awesome earbuds and Airpods are way overpriced and I would take these over airpods. fast 2 day delivery. 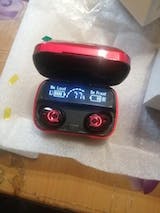